10mm Ammo rose to prominence among American gun owners in the late 1980's when the Federal Bureau of Investigation adopted the caliber. At the time, the agency was looking for a stronger round for its agents to use in the field. While 10mm rounds never gained the traction of some other handgun calibers, there are still a number of American shooters who trust the cartridge with their lives today.

With bullet weights ranging from 135 grain all the way up to 200 grain, the 10mm round packs a larger punch than most 9mm and 40 S&W rounds, which is exactly why it was designed. Here at BulkAmmo.com, we work to keep a supply of full metal jacket rounds on-hand for range use as well as jacketed hollow point (expanding) bullet rounds in-stock for personal defense. 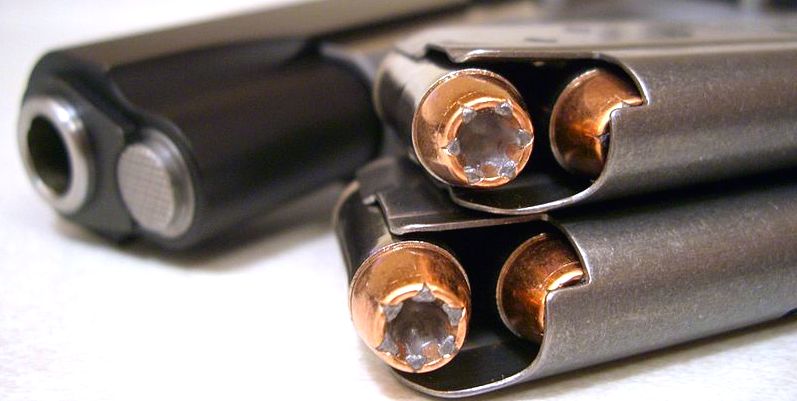 If you've been around firearms for long, you've probably heard the name Jeff Cooper. Cooper is a well-known firearms expert and in the early 1980's he set out to produce a mid-velocity handgun round that could out-muscle 9mm rounds and brought better ballistic properties to the table as well. In the end, he produced a cartridge that many shooters argue has a flatter trajectory and greater range than the .45 Automatic.

From there, FFV Norma AB took Cooper's design and made some slight modifcations to the original 10mm. First, they decided they wanted the 10mm to be more powerful. Their product, introduced to the shooting world in 1983, was designed to be used in the Bren Ten pistol. If you watched much television in the '80s, you might know the Bren Ten from the popular series Miami Vice. In fact, that show made the Bren Ten a flash in pan of sorts among gun owners as many saw it on the show and went out to buy one. That popularity, however, was somewhat short-lived.

In 1990, the Federal Bureau of Investigation adopted the 10mm for a brief period of time. Extensive testing by the agency led them to believe that the full-power commercial 10mm ammo load would be best for law enforcement purposes relative to all other handgun calibers available. Using the Smith & Wesson Model 1076 pistols, the biggest drawback of 10mm ammo was that it was too powerful and provided what some considered "excessive" recoil. Shortly thereafter, the Federal Cartridge Corporation started producing a "10mm lite" load that didn't pack quite as much recoil. This round would later rise to become one of the more popular rounds today, 40 Smith & Wesson.

The popularity of 10mm ammo diminished as law enforcement switched to other calibers and the American shooting population neglected to widely adopt the cartridge. Still, there are many gun owners who enjoy and rely upon the caliber today. A number of major firearms manufacturers still produce pistols chambered in 10mm:

You can also find hunters who are able to successful use the cartridge in the field. Also of note, the Danish government utilizes 10mm pistols for use against polar bears in the arctic regions of the country during their patrols.

If you're looking to get some training or practice time in, your best bet is going to be selecting 10mm ammo loaded with a full metal jacket (FMJ) bullet. These rounds are relatively simple and aren't designed to do anything too fancy when they hit a target --- they simply ball up. Because these rounds aren't overly complicated, they're among your cheapest options for repeated practice, especially when you buy in bulk. Here are some of our most popular 10mm ammo options right now:

Score Cheap Ammo for the Range

If you're looking for an ammunition to load in a concealed carry pistol or for any type of critical use (i.e.., self defense) you should look to 10mm ammo with an expanding bullet. Most pistol carriers will select a jacketed hollow point (JHP) round for these purposes. With a JHP, the bullet is designed to expand when it comes in contact with a soft target. The purpose is to inflict as much damage as possible to neutralize any threat that comes your way or - in the case of hunters - inflict maximum damage and humanely bag game as quickly as possible.

When Your Life Depends Upon It