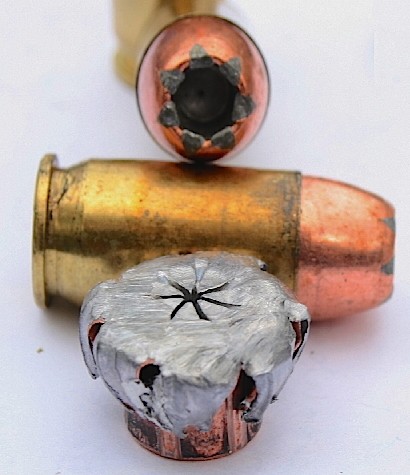 John Browning developed the 45 automatic colt pistol, or 45 ACP cartridge in 1904 for use in what would become his iconic 1911 pistol. The design has its roots dating back to the 1890's. At that point in time, the United States Calvary was testing various handgun calibers and determined that there was no caliber on the market large enough to take down the most determined of threats. Eventually, they would give up their 38 special firearms and ammunition in favor of handguns chambered in 45 ACP.

Today, you'll find a variety of 45 ACP ammo in-stock here at bulk ammo with great choices for both training and self-defense ready to ship fast.

Full metal jacket or FMJ bullets are most commonly used with firearms chambered in .45 ACP for range use. The relatively inexpensive projectile is also commonly referred to as "ball ammunition" because the projectile remains basically a ball upon impact with a target. There is little expansion available. You'll commonly find brass-cased 45 ACP ammo as well as the generally cheaper steel-cased 45 auto rounds.

Other shooters in search of an effective round for self-defense will likely want .45 ACP ammo loaded with a jacketed hollow point (JHP) bullet. These rounds are specifically engineered to inflict the maximum amount of damage with a target. These rounds expand when they make contact with a target, allowing for optimum penetration and lethality. If you're unfamiliar with what we mean by bullet expansion, the image to the right demonstrates how a projectile can expand upon impact with a target.

Of course, there are a number of other bullet types frequently available. These include frangible rounds that essentially turn to dust upon impact with a hard surface, total metal jacket (TMJ) and full metal case (FMJ) that bring similar performance to FMj rounds, and specialty rounds like Hornady's Zombie Z-Max ammo.

In terms of weight, the most common projectile you're likely to fire from a .45 ACP firearm is a 230 grain bullet. Many shooters prefer faster moving but lighter 185 grain projectiles. Of course, the choice is your as to what bullet weight is the most effective for you to use based on your individual skill level and needs.

.45 ammo is still widely used by law enforcement, special forces, and other agencies around the world and is manufactured by a number of a trusted companies because of it. Federal, Fiocchi, Wolf, Remington, Blazer Brass, PMC, Magtech, and Sellier & Bellot are all commonly in-stock here at BulkAmmo.com when you browse the .45 ACP selection.

If you're heading out to the range, you're going to want to stack up on 45 ACP ammo. For training, we suggest you bulk up on full metal jacket (FMJ) rounds. This ammo features a bullet that is designed not to expand upon impact with a target. It's typically not as sophisticated as some of the more expensive rounds but with the right manufacturer and load, FMJ ammo is accurate and reliable for a full day of range training with your 1911 or other 45 Auto chambered firearm. Here are some of our most popular training ammo choices right now: